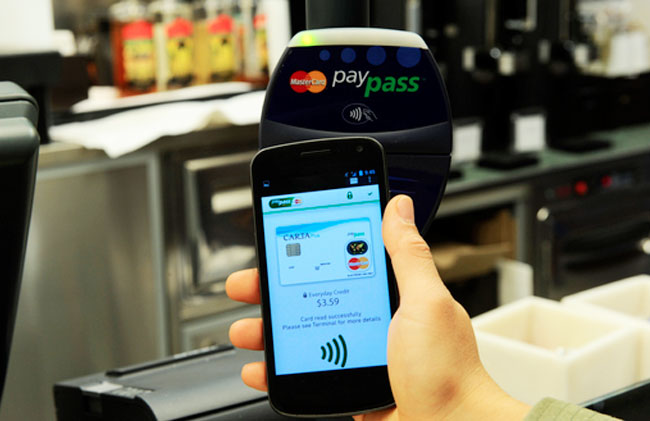 Apple, Samsung, Android and PayPal are cashing in on apps that let people make payments using their phones. Money makes the world go round, but now it’s going mobile.

We already text, shop, get the latest news, play games and check social media on our smartphones, and now they even act as digital wallets because of mobile payment apps.

Users can upload their credit card info to each service, some will even scan cards using the smartphone’s camera. No more paper and no more typing. Whenever a purchase is made, the apps require a password or PIN number for security. Most systems use near field communication (NFC), so people just have to tap their phones at point-of-sale terminals. With a system this easy, it seems like we’ll be waving “goodbye” to wallets in no time.

Here’s a guide on which stores you can shop at without handing over plastic or paper.

Launched just a year ago, Apple Pay has the most retailer support and is available on every iPhone 6 and 6 Plus. Apple has deals in place with three major credit card companies: Visa, MasterCard and American Express. They also plan on adding Discover this fall.

To see the full list of banks that support this new form of payment, click here. You’ll find a long list, but a few larger banks are Bank of America, Capital One, TD Bank, We;ls Fargo and Western Union.

As far as Apple Pay and retailers, there are hundreds of thousands of restaurants, hotels and grocery stores who accept this payment. Some of the bigger names are Macy’s, Whole Foods, Starbucks, Walgreens and Best Buy. There are rumors that Home Depot and Target could soon add Apple Pay as well.

Soon, it’ll be accepted at hundreds of stores and many of those also accept Apple Pay. Check out the full list here.

This payment system hasn’t even gotten off the ground yet, but rumors suggest Samsung Pay will be released in about a month with the Galaxy Note 5. Like Apple and Android Pay, Samsung will also use NFC technology, but has magnetic Secure Transmission which will allow it to work at registers that don’t support NFC payments.

Samsung has deals in place with MasterCard and Visa, and is negotiating with American Express, Bank of America, Chase, Citi and U.S. Bank. Samsung claims their version of mobile payment has the potential to be accepted by 30 million merchants. That’s a lot of retailers where you won’t have to worry about cash or credit anymore.

Last but not least is the oldest one of the bunch – PayPal. This app lets users track their balance, make purchases and send funds to friends. Credit card info is also loaded into the app by camera, and users confirm purchases by logging into their account with a username and password or PIN. There are 1,063 stores that accept PayPal, and that list includes Apple Stores, Best Buy, eBay, Target.com and Walmart. Soon, Subway will be added to the list.

It’s starting to look like cash might not be king anymore. These new apps are so popular because they’re so convenient. While people won’t have to worry about leaving their wallet at home or having enough cash, they will have to make sure their phones are fully charged. Veloxity offers phone charging kiosks with lockers that you can buy or rent for your business. With everything going digital don’t be left behind with a dead phone. Find a local Veloxity charging station and get back on track.