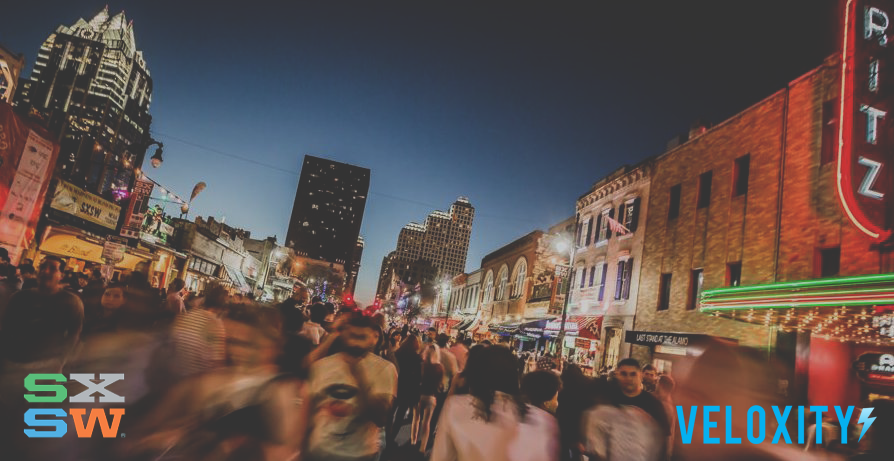 What The Veloxity Charging Solution Team Learned at SXSW2016

There was decidedly a ton to learn, see and experience at #SXSW2016.  Attendees were able to charge their devices using Veloxity charging stations at the Austin Convention Center, the SXSW Trade Show Meet Up Pavilion and the SXSW 2016 Artist Gifting Lounge. And direct from Boston, the Veloxity team collected some memorable takeaways.

So there was all the talk about tech, film and music Austin, Texas at SXSW2016. But President Obama and first lady stole the show.  Obama’s appearance was the first by a sitting president in the history of the 30-year-old event.  After a visit to Torchy’s Tacos (during which he ordered not only a Democrat taco, but also a Republican and an Independent from the menu), President Barack Obama entered to a standing ovation.  Well, the SXSW website sums it up with this blurb:

The President, in a conversation with Editor-in-Chief of The Texas Tribune, Evan Smith, called on the SXSW audience, and the tech industry at-large, to solve the nation’s biggest problems by working in conjunction with the United States government. “It’s not enough to focus on the cool, next big thing,” Obama said, “It’s harnessing the cool, next big thing to help people in this country.”

He had a lot to say about digital privacy and security. Specifically, privacy trade-offs may be worth the extra security.  Obama tried his best to make peace with the tech community, especially amidst the uproar over the FBI’s legal battle with Apple.

The Veloxity team saw First Lady Michelle Obama give her opening keynote for SXSW Music 2016. She discussed the Let Girls Learn initiative, which aims to break barriers for the 62 million girls around the world who are not in school today, more than half of whom are adolescent.   The initial

The First Lady chatted with Missy Elliott, Diane Warren, and Sophia Bush. The session was moderated by Queen Latifah. The Keynote was co-presented AOL MAKERS.

The ladies talked movingly about situations that could have been limiting for them personally, from lowered expectations for the young Michelle Obama, growing up on the south side of Chicago, to Queen Latifah, who lost two cousins to the AIDS epidemic and her own experience with activism — “the little action I could take as a teenager.”

McDonald’s unveiled “V-Artist” at the 2016 SXSW festival.  Always hungry and eager to be happy, the Veloxity team had the unique opportunity to step inside a virtual Happy Meal Box and tried to be creative.

At the McDonald’s Happy Meal experience during SXSW 2016, the Veloxity team learned that McDonald’s understands how collaboration is as important as convenience. Through VR Experience and the HTC Vive, it’s possible to create artwork and share via social media. In addition to the VR Experience, the introduction of self-servicing kiosks allow building and customizing food. Being a sponsor of SXSW alone makes McDonald’s start to transform its image to work with the tech ecosystem and their techie demos only helps this mission.  The “everyone walks away smiling” experience is exactly what Veloxity charging stations provide.  Boom!

And, of course, there was Grumpy Cat.

The Veloxity team and the Veloxity device charging solutions are always eager and ready to power up any event.  Just ask!